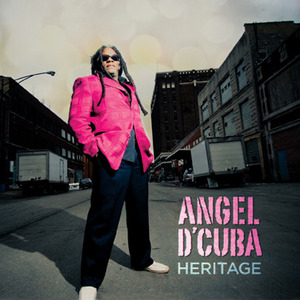 As a youth in Havana, singer/composer/multi-instrumentalist Angel d’Cuba (born Angel Luis Badell) was already exploring music from the rest of the world at the same time that he was absorbing and sharing his own rich heritage.  He even got into breakdancing as a teenager.  His early career on the island ...

included work with several bands including the group formerly led by the late, great Emiliano Salvador, but by his own account, his time as lead singer with the supergroup Mezcla, which performed a broad spectrum of world music, soul, rock and jazz in addition to the more “traditional” Cuban styles, was the experience that probably had the strongest influence on his future approach to music.

Coming to Chicago (an unusual choice at the time for a Cuban performer, but Angel tells me that it was all about love) meant leaving an established, reasonably secure career to pay a new set of dues all over again, but he persisted while developing a following and attracting some of the city’s finest talent to his ensemble.  Still, in spite of having a star’s voice, outstanding original compositions and an elite band, he remained relatively unknown in much of the United States outside of Chicago.

That is, until now. Heritage, which features Angel’s own compositions and arrangements in an expanded ensemble setting, finally gives him a long-overdue proper introduction to the world at large, showcasing his wide musical range, while still honoring his roots. This project has a Cuban heart, as you’ll hear in Muchacha de Escuela (a tasty Songo), and Can’t Hide Love  (a Funk-Mozambique fusion guaranteed to make you move), and it also features a much wider range of genres including Vallenato-style Cumbia, Samba, Calypso, even some Reggaeton, which is all done con alma y sabor.

Angel d'Cuba has never shied away from dropping everything he can into his music. A native Cuban, Angel came up in a rich musical melange where James Brown and Jackson 5 grooves mixed freely with red--hot Afro-Carribean traditions. And Angel never hesitated to add new flavors--funk, R&B, soca, samba, rock--to this eclectic sonic mix.

Moving to Chicago further expanded Angel's musical palette, as he demonstrates on Heritage (available: February 5, 2013). Formerly the lead singer of the Cuban supergroup Mezcla, Angel takes on the role of bandleader with Heritage. And he pulls out all the stops, giving shout-outs to Colombia's swaying cumbia (“Soñe con Colombia”), lingering over romantic pop ballads ("Amor Anonimo"), dashing out a reggaeton tale ("Juana la Cubana"), and firing up fierce dance-inducing salsa ("Herencia").

Freely mixing diverse material comes naturally to Angel. For d'Cuba, unity and harmony--in music or among people, as he calls for in "Colorvision"--is a natural extension of Cuba's--and his own--musical past.

“I am the fourth generation of musicians in my family, that’s why I sing about herencia, about my heritage” Angel reflects. “The song is summing up all the influences that came into Cuba, all the influences on Cuban music that made it as strong and diverse as it is today.”

“When I was in Cuba, I had a very clear image about what I could see on the other side of the ocean, I thought it could be different from the difficult environment I faced in Cuba,” recalls Angel, who grew up in a very musical family that struggled to make ends meet. “Everyone talked about the dreamland that was America. I imagined a child with a new bike and a bunch of cookies and candies. I imagined everyone was happy and no one was fighting.”

Along with visions of an easier, sweeter life, American artists--especially James Brown; Michael Jackson; and Earth, Wind, & Fire--inspired Angel. He found himself intuitively mixing their sounds with son, danzón, songo and other musical forms of his parents and uncles

Angel’s well-honed, open-eared sensibilities boosted his rapid rise to the top of Cuba’s music scene as front man for the rock and Latin jazz powerhouse Mezcla, whose fans include Carlos Santana and the late Tito Puente.

Yet Angel left it all behind. While touring with the band in Chicago, he fell in love and sacrificed his Cuban stardom to make the Windy City his home. It was a challenging choice, and Angel found himself starting from scratch. “I like Chicago, but it’s been a bit rough,” muses Angel. “Now it’s more comfortable, because I have good friends.”

Angel’s friendships have a strong musical side and led to his first Cuban project in his new home. James Cornolo and Brett Benteler, local musicians and newfound friends, wound up playing in a trio that eventually morphed into a full-fledged big band, with bold, bright brass and a blazing Latin percussion section.

Angel did more than find the right backing players however. He passed along his musical heritage to his friends. While playing percussion in a Chicago reggae band, Angel met Cornolo. Cornolo was so taken with Cuban sounds that he resolved to learn the tres, a relative of the guitar and a hallmark of traditional Cuban music.

“I was interested in Cuban music but when I saw I had a Cuban star to learn from, I knew I had to go for it,” recalls Cornolo. “Angel mentored me on the tres, singing parts to me and giving me verbal instructions. I converted a small guitar into a tres because it’s not easy to find a good instrument in the U.S.”

This spirit of inspired ingenuity and eclecticism shines on the tracks of Heritage.  Angel rethinks his funk idols Earth, Wind & Fire’s hit “Can’t Hide Love,” putting the song to a hard-hitting Mozambique beat. He’s just as able to add jazz, soul, or rhythms from Haiti or Trinidad to a Cuban core, as he’s eager to salute his current home in creative ways. Angel enlisted the voices of inner-city children from a local El sistema –based musical outreach program to add another, sweet dimension to “Colorvision” and even celebrates the ties that bind him to the city on unexpected tracks like “Una Samba en Chicago,” sung in Spanish and dedicated to Angel’s Brazilian friends.

The polyglot, pan-American vibe feels utterly natural to Angel, who has always embraced anything and everything that sounded good. “I believe that your actions, over time, become perfection,” reflects Angel. “Because I’ve faced so many challenges since moving here, I made this album.”